This September we’re running a series of workshops on getting the most out of your hubs. We’ll be looking at a number of our favourite hub manufacturers and the specific processes required to clean, service, and overhaul their hubs. We’ll also discuss the specific tools, lubricants, and many useful tips and tricks that you wont always find in the service manuals. Whether you’re a D.IY. home mechanic or just simply want to have a better understanding of your equipment, the workshops are not to be missed. 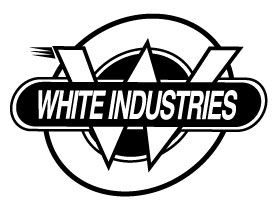 For the love of cobbles

It’s no understatement to say that I am obsessed with the sport of cycling. From the first time I watched the Tour de France on T.V. in the late 90s I’ve been captivated by the theatre (in all senses) of the peloton. The growth of cycling in Australia during the last decade has gone hand-in-hand with a more sophisticated understanding of the sport amongst cycling fans. A decade ago it was all about the Tour de France, now we follow the cycling season from the Tour DownUnder in January to the Giro di Lombardia in late September. To give credit where it’s due, I don’t think any of this would have been possible if it were not for the tremendous efforts of SBS Cycling Central who pushed hard to broadcast more races to Australian audiences throughout the year (see: A brief history of Australian race coverage). Unfortunately we still have a long way to go before womens cycling gets the attention it deserves, but there have been some improvements in recent years. 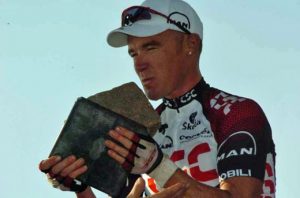 In 2008, SBS broadcast Paris-Roubaix live on television for the first time. Ironically it was one year too late for Stuart O’Grady, the first Australia to win the prestigious race in 2007. The  Roubaix coverage would start at 11pm (Sydney-time), and I remember watching it with several clubmates from the Dulwich Hill Bicycle Club. We all dosed up on coffee to stay awake as Tom Boonen and Fabian Cancellara duked it out over the cobbles on Northern France. Paris-Roubaix was always much more exciting than Tour de France with less team tactics and calculating breakaways. Everything was on the line in this race, and anything could go wrong at any moment. Like many cycling fans, the cobbled classics (Paris-Roubaix and The Tour of Flanders) became my favourite races of the year. I’d always made the effort to watch these races, even with the unfavourable viewing hours.

In 2014 I moved from Sydney to Fremantle. Driving across Australia with my pregnant partner, I has a secrete agenda of getting across the Nullarbor in one day instead of two, so I could watch Milan-San Remo when we arrived at a motel in Norseman. I couldn’t spare the thought of missing the race. One of the first things I noticed when I arrived in the West, was the different timezones. Instead of watching bike races in the wee hours of the night, everything was now primetime. The was no excuse not to watch the bike races. I could still be functional and get to work the next day.

Fast-forward two years and I’d come to know Phil Stevens, a local rider and music industry guy, who was involved with a new/refurbished pub in South Fremantle called The Local Hotel. At the time I knew of no places in which bike races were screened live in Perth. This made no sense to me. It seemed like and opportunity too good to miss. Our first Paris-Roubaix night was a bit of a raucous affair. We had no idea just how many would turn up! Apparently we out-drunk the crowd that came to watch AFL grandfinal. 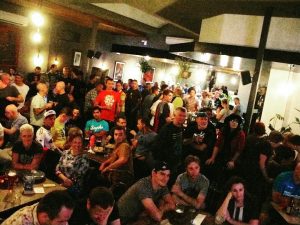 The 2016 edition Paris-Roubaix ended with the 37 year-old Australian, Matt Hayman holding on to out-sprint four-time winner Tom Boonen in the Roubaix Velodrome, to the disbelief of everyone watching. Hayman had broken his arm 6 weeks before the race and no-one expected him to finished with the leading group, let along win against more favoured opponents. It was the ultimate underdog triumph, he had used a home trainer to keep fit for weeks while his broken arm mended. The finish was made even more memorable by the shared sense of awe and disbelief in those who had come to watch the race. We couldn’t have planned a more thrilling end to the night. 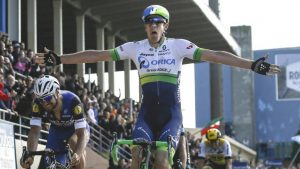 In 2017, the Cobbled Classics will be back to The Local Hotel new and improved. For more information check out the following event pages:

The Tour of Flanders, Sunday 2 April 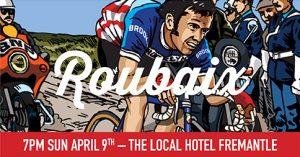 Wheel talk with the Cycling Maven

After an early riverloop I dropped into my local cafe for quick bite last week. As always, there was a group of cyclists out the front, it’s like that in North Freo. By chance I recognised the kit of one guy, Mark Ferguson, aka the youtuber/vlogger known as the Cycling Maven. I’d gotten know the Cycling Maven from his excellent videos with Raoul Luescher, the carbon bike guru in Melbourne. Mark’s work chronicling the Australian cycling scene was prolific and I’d become a regular subscriber to his youtube channel. We had a quick chat at the cafe and then I headed off to work. A little later I contacted Mark and asked if he’d be interested in visiting my workshop while he was in town. By good fortune he was interested so we caught up the next day.