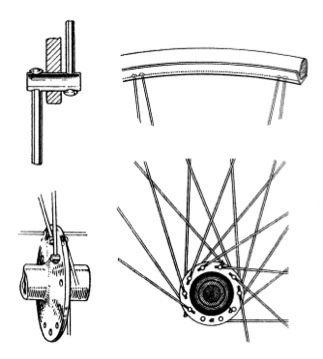 Wheels are an essential part of the bicycle. Without wheels the concept of the bicycle would be meaningless: there would be no ‘bi-cycle’. However, despite this ubiquity, the bicycle wheel has received comparatively little attention amongst popular and scholarly cycling histories. Technological developments in bicycle frame and drive-chain systems have appeared far more spectacular, while wheels have served as a mere accompaniment. The popular catchphrase “re-inventing the wheel” typifies the notion of the wheel as a steadfast and unwavering technology. As a wheel builder I am constantly fascinated by the ways in which bicycles wheels have been re-invented throughout their short history. On 15 August 2016, I presented the following talk to the West Australian Historic Cycling Club on technological developments in the history of the bicycle wheel.

I have been following Melody Wheels on Instagram for a number of years. There are a handful of top quality wheel builders sharing their products on social media but the knowledge that Melody readily share is what sets them apart...
Neil @ Moonglu, UK. https://www.moonglu.com/